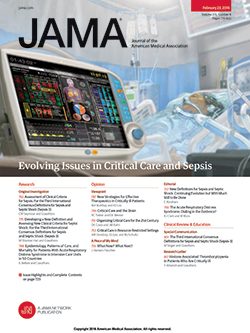 Journal of the American Medical Association.

In a large RCT, 848 women at 16 different IVF centres in Australia and New Zealand were given acupuncture (with real or sham needles)  by 80 different acupuncturists. A standardised protocol was delivered on Day 6 of the drug stimulation phase and another before and after the embryo transfer. The data indicated that at this dose of acupuncture, and using these protocol points, there was no significant difference in live births between those who received the real or the sham needles.

The authors admit that ” the lack of frequent treatments was a limitation of our trial” since in real clinical practice acupuncture treatment is individualised with variation in dosing, including more frequent treatment prior to and during the IVF cycle.

They also noted that while a very short course of acupuncture may statistically be no better than sham at improving live birth and pregnancy outcomes, a psycho-social benefit from acupuncture was reported by women undergoing IVF.

Importance  Acupuncture is widely used by women undergoing in vitro fertilization (IVF), although the evidence for efficacy is conflicting.

Objective  To determine the efficacy of acupuncture compared with a sham acupuncture control performed during IVF on live births.

Design, Setting, and Participants  A single-blind, parallel-group randomized clinical trial including 848 women undergoing a fresh IVF cycle was conducted at 16 IVF centers in Australia and New Zealand between June 29, 2011, and October 23, 2015, with 10 months of pregnancy follow-up until August 2016.

Interventions  Women received either acupuncture (n = 424) or a sham acupuncture control (n = 424). The first treatment was administered between days 6 to 8 of follicle stimulation, and 2 treatments were administered prior to and following embryo transfer. The sham control used a noninvasive needle placed away from the true acupuncture points.

Main Outcomes and Measures  The primary outcome was live birth, defined as the delivery of 1 or more living infants at greater than 20 weeks’ gestation or birth weight of at least 400 g.

Acupuncture administered after spontaneous rupture of membranes at term significantly...